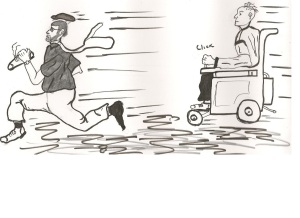 It was the third day on my annual jaunt to North Wales when I’d decided to explore Colwyn Bay and had spent a couple of hours walking around. I rather like walking and at the time I was very into it for health reasons. I’d been told by the doctor to get exercise and so here I was, even on my holidays, exercising.

It was about 2pm when I decided to eat the small lunch I’d bought myself in Morrison’s. I found a small bench just outside but in a shade.

Not too far away, while I was eating and reading The Independent, I glanced up and saw a bloke in a wheelchair. He was quite disabled, thin, slightly twisted, whose hands gripped a control, one on each of the arms of the wheelchair. I felt a little guilty as my mind compared him to the Davros character from Doctor Who…

He was talking to a bloke in a suit. I don’t know how long the chat with suit had been going on for but the suit sudden dismissed the chap in the wheelchair with an irritated wave of his hand.

I quickly looked back at my newspaper, perhaps he was asking for money? Whether he was born like that or had an accident that put him there I didn’t know.

I’d polished off the first sandwich and washed it down with Evian mineral water, when I got a feeling I was being watched.

I looked up in mid-chew and a few feet from me was the bloke in the wheelchair. He was looking directly at me. I smiled, being an amiable sort of chap, especially when all feels right with the world.

He took it as his cue. He flicked one of the levers on the wheelchair and moved to within a foot of me.

Not the most original of openings but my ‘hello’ in reply wasn’t exactly a classic either.

‘Do you live here?’ Wheelchair asked.

‘What on this bench,’ I replied, smiling.

Wheelchair frowned. I don’t think he quite followed me on that one. I wondered if he was also mentally disabled? Then felt I was being unintentionally cruel.

‘Do you live in Colwyn Bay?’ he repeated his question.

He was alright mentally, just thought it was a crap joke!

‘What staying in Colwyn Bay?’

‘No, I’m actually staying in Llandudno, B&B for the week. Audley House.’

‘Have you got much of your holiday left?’

I noticed that he couldn’t keep his head too still so he never seemed to be looking directly at me. That was alright but it meant I kept getting tempted to look over my shoulder…

‘About five days,’ I told him.

I thought he was going to suggest we pair up for the rest of the week. It didn’t appeal to me as this holiday was about spending some quality time with my favourite person – me!

He seemed to get distracted. He looked down at my feet and then said: ‘Are those new training shoes?’

I frowned. Odd question, but I answered. ‘Not exactly, they’re walking trainers, very comfortable for walking. I do quite a lot of walking. Normal trainers wouldn’t cut it.’

‘Would you mind if I felt the inside of one…’

I paused for a second trying to wondering if I’d heard correctly.

‘You mean take one-off.’ (Yeah, I know, stupid question, but I was a little puzzled by the request.)

I paused, visions of me handing over the trainer and him doing thirty in the wheelchair as he made off with it. I shrugged the stupid fantasy out of my head. Besides, he’d got two feet…

Feeling a little odd, I unlaced the trainer, then handed it to him. He checked out the inside with one hand.

‘Good for walking in…’

He gave me the shoe back and I put it on lacing it up. A little silence built up while I was doing it.

‘Are you married?’ he asked once I’d sat up again.

It was my turn to frown; the question seemed to come out of the blue: ‘No,’ I answered. ‘Thought about it a bit lately, after all most of my friends are, and it isn’t fair that I should be so happy…’

I got a smile for that one. Not all duds.

‘I’m not married either,’ he told me.

‘Ah,’ was all I could think of saying.

‘It’s not nice being on your own…’

His attention wavered a little before he carried on.

‘It’s lonely not being married.’

‘Something that’s never bothered me,’ I replied.

‘Well, maybe one day…’ I responded, trying to be optimistic or polite, I wasn’t sure which.

‘It’s not good being on your own. It’s frustrating.’

I suddenly felt a tingle run the length of my spine. It was a warning but it wasn’t telling me what it was warning me of?

‘It is though. I get very frustrated.’

‘Do you get frustrated not being married.’

‘I mean when you’re married there are things you can do, aren’t there?’

‘Um, yes,’ I responded but the warning was flashing red in my head as I was getting a feeling I’d figured out where things were going…

His hands moved off the controls that gave his wheelchair movement and he showed them to me. They were clenched with little mobility. A pang of sympathy worked through me.

‘I get frustrated and I can’t do anything about it, not with these hands…’

I didn’t like what was now going through my head. I could almost guess what was going to come next and not just because there was a voice in my head going ‘warning, warning, danger, danger,’ in a voice very like the robot from ‘Lost In Space’.

‘I can’t relieve my frustration…would you mind helping me? We could go somewhere private…’

It took only took the smallest fraction of a second for me to reply but it seemed like longer.

‘Rather not,’ I sort of croaked, thinking to myself that if I was going to call on the services of the five-fingered widow, then it wouldn’t be for him.

He didn’t look too embarrassed as he said: ‘I hope I haven’t offended you. You didn’t mind me asking?’

‘Let’s just leave it there,’ I answered, looking at my watch. ‘Goodness, I have to be somewhere…’

I could have added ‘anywhere, just anywhere.’

As I shoved the remains of my lunch into my bag, he made a retreat, zig-zagging between the crowds, which rather suited me…

I walked rather rapidly in the opposite direction to find a bus stop, having decided I would eat the rest of my lunch on the way back to Lllandudno.

I hoped I could get one of the rare single seats…