Having slipped off to the land of nod at around 9.30pm the previous evening I awoke at about 6.30am. The first full day in Llandudno beckoned.

So after a shower I got dressed and took my MacBook Air outside and began detailing our rather irritating journey up to Llandudno in the fine early morning weather.

Getting near to 8.30am and the Pink Lady was peering out the front door at me. Breakfast awaits…tally ho!

Cereal, orange juice to start with, followed by full English and round off with toast and coffee. What better start to the day could a hungry Fitrambler want?

Once over the Pink Lady was anxious to get to the sea front so we walked to the East Beach – the one with the pier. It was something of a tradition we walk round the Great Orme on a Sunday. I have to admit with the leg being a bit dodgy I wasn’t so keen…

However, after ten minutes sitting looking out to sea, the Pink Lady became restless and we started off. The knee didn’t feel too bad so I thought perhaps I might get away with it.

The plan was to stop at the Rest & Be Thankful – nothing new over the years – before continuing the journey. Last year it was the old back playing up but it did at least behave for all the long walks. I remember I didn’t stop walking at quite a pace until I reached the Rest & Be Thankful. I left the Pink Lady behind as I was frightened if I stopped I wouldn’t be able to get going again. By the time the Pink Lady arrived I’d finished my first cup of Earl Grey. I offered to get her a drink but I think she might’ve been a little miffed at me for charging ahead.

Anyway, she got her own and also delighted in taking pictures of the stained glass at the entrance. Cheered her up somewhat.

I was on the final length of hill leading to the Rest & Be Thankful when I began to find it rather difficult going. It wasn’t so much the knee but both the legs were getting quite tired. I guessed this was down to not doing enough pre-holiday walking in.

But I got there with the Pink Lady and we decided on coffee. We found a table and as is often the case as soon as I got comfortable she wanted to move to another table. 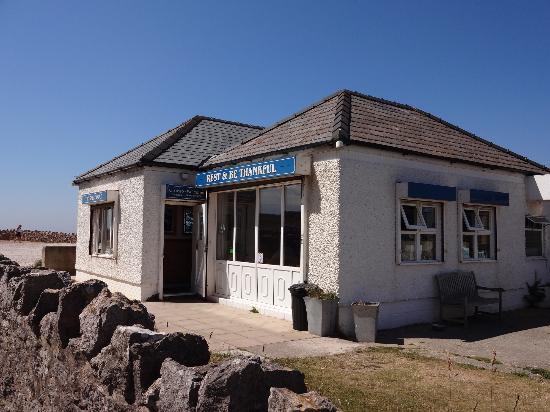 ‘They’ve moved the glass,’ said she, once we settled at the second table.

‘Oh,’ said I. Then frowned. ‘What glass?’ I looked around the table.

She signalled to the wall above the table where there was stained glass.

‘Ah,’ exclaimed I. ‘Been a bit of movement since last year as the counter’s in a different place.’

‘I took a picture of that last year and it looked better with the light shining through it.’

She was right. I remembered it was rather a good photo.

We stayed about half and hour before starting on the last half of the journey. This time it would be mainly down hill therefore easier.

We stopped after twenty minutes and the Pink Lady used her binoculars to look out. From where we were I pointed out the direction in which Bangor lay. Two years ago we went there (and yes, yes, ‘didn’t we have a lovely day the day we went to Bangor’. Better get that in before anyone else does!) and stood on the pier. By going nearly to the end we found we could make out the Great Orme with our binoculars.

When on Bangor pier, right at the end, we could see across to Beaumaris. I mentioned this but the Pink Lady was more concerned with a lighthouse.

‘It’s not actually on the land but in the sea. It’s to the right of two sail boats and that little island.’

The little island is Puffin Island. You can’t actually go there without the permission of the owner. It’s classified as a Site of Special Scientific Interest (SSSI). There are boat trips around it, some arranged by the RSPB and operate out of Beaumaris, Anglesey.

The next stop caught us at a point where below in 1940 the Royal Artillery’s Coastal Gunnery School was located. Now there are only the foundation but where we were resting was a board showing details about them. The actual installations were dismantled by the 1950s. 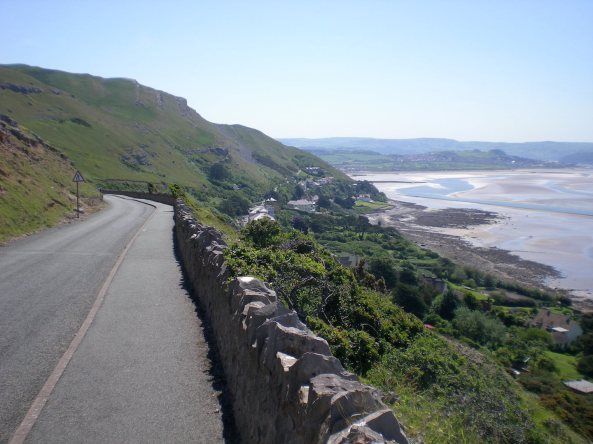 It was not long after this stop that the knee began to play up. Damn thing! I was hobbling and really making use of the walking stick.

By the time we were off the Great Orme and onto the West Beach I was grateful to find a bench to sit on.

‘You need to take something for the pain,’ suggested the Pink Lady. ‘Ibuprofen, a muscle relaxant would help.’

‘Not sure I can take it with the blood pressure tablets I’m on.’

‘Might be an idea to get a support bandage.’

We rested for a while and then I noticed the road train. The Pink Lady and I rode on that last year. I was reluctant then but this year there was a certain appeal as it would take me within an easier walking distance of the Guest House.

The Pink Lady decided to walk and I paid my £1.50 single journey ticket. Obviously I got to the other end but as with all train journeys these days there was a delay at one point; a bus was blocking the route by being parked where it shouldn’t. Some things never change.

The Pink Lady and I a little while later met at the monument. After a few minutes I made two suggestions. The first involved getting some fruit for dinner and the second one was a trip to Caffe Nero for a coffee.

We got the fruit and took it to the front to eat as we watched the sea and the blue sky. It wasn’t a bad day at all. I was beginning to feel hopeful about the holiday.

Once we’d eaten the second suggestion kicked in along with an amendment. Across from Caffe Nero there was a clothes shop she wanted to go to. Once she’d finished her customary Soya Milk Latte Grande she was across the road to the clothes shop.

I decided to get involved with some intellectual entertainment. Yep, a few games of Angry Birds on the iPad. Yeah, I know how to live! And also managed to sneak in a hot chocolate with a whipped cream topping sprinkled with chocolate bits. Which reminded me, over 24 hours here and not one Mint Magnum consumed!

The Pink Lady returned with carrier bags and a grin, having completed a successful shopping session. I was pleased. We’d both had fun in our respective ways.

We agreed to go back to the Guest House as my knee really giving me pain now.

Then a rest outside the Guest House with the sun shining brightly until the evening meal….Scotch Broth, Roast Beef and a jam sponge and custard…

We decided upon an evening in. I was a great big tired old Fitrambler….