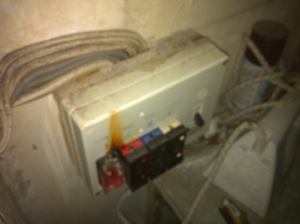 First there was the washing machine. It was first installed in the Fitrambler Kitchen in 1999, and as I write is now twelve years old.

Unfortunately, as I said to the Pink Lady: “Things just aren’t built to last these days.”

She looked at me and sighed. “Twelve years is good for a washing machine.”

“I beg to differ. My ‘fridge is near on twenty-five years old and is still going,” I said; my fingers crossed behind my back, hoping it wouldn’t join the washing machine.

My eyebrows shot up so far they almost left my forehead, fortunately m cap was there to stop them. “Five years! Five bloody years? Is that what I’ve got to look forward to? My next washing machine only lasting five years?”

The stare I got told me what I needed to know. A five year cycle on washing machines whether I liked it or not.

“The trouble with you, Fitrambler, is you just hate opening your wallet unless it’s for beer or gadgets!”

“I resent that remark.”

“Then buy a washing machine!”

“This’ll go on for months just like it did with the bike.”

“Yee of little faith. I’ll get one sorted out. I’ve already spoken to Neatentidy and he’ll fit it for me.”

“You can always get the shop you buy it from to do that!”

“Well, Neatentidy fitted in the other one and will know his way around the connections…”

“You mean he won’t charge you and the company will…”

“You have a suspicious mind. And it’s not strictly true. He designed the kitchen, remember, so he’s better placed to get the new one connected. It’s a matter of trust rather than money.”

The Pink Lady gave me the look that always told me she wasn’t convinced.

When it came to doing the washing I felt sure I’d seen a laundrette near me recently. The last time I needed to use a laundrette was for about six months in 1999. There was a laundrette ten minutes away for many years but two weeks before I needed it the bloody thing burnt down. The one I had to use was just over twenty-five minutes walk away, which meant fifty minutes walking time and just over an hour to do the washing. It was Summer when I began but by the time I was nearing the end – when the new washing machine was due to be plumbed in – it was dark nights, cold or wet and the novelty of the walk had quickly worn off.

So, the following Sunday I looked for the laundrette I was sure I’d seen near to home; although the cynical part of me felt I probably imagined it. However, within five minutes I’d found it and returned home to get the washing.

Once I entered the laundrette the relief was short-lived. First I realised I hadn’t brought any washing powder or conditioner; so straight away was forced to part with £1.50 to buy some from the chap running the place. Then I realise it wasn’t going to be a simple matter, like a shop, going in, get what you want and get out. I’d forgotten about the previous experiences with a laundrette. There’s no guarantee that there will be a washing machine free, the wash takes about twenty-nine minutes and then you’ve got to hope one of the driers will be free immediately after, or the time in there is extended even further.

Needless to say, I had to wait ten minutes for a washing machine which would be big enough to take the amount of washing I’d brought, then there seemed to be one hell of a bigger queue for the driers; mainly due to most people using the place for just the driers after doing the actual wash at home.

I was in there for nearly two hours and parted with a total of £7.50. It wasn’t the most pleasant of experiences and it made me shudder to think I was going to have to go through this every week until I bought a new washing machine.

Still, I’d get the washing machine organised next week…

But I didn’t. Work was busy so I never got around to having a full lunch break so never got time to check the internet and I was getting home in the evenings after 7pm most nights so by the time I’d eaten and washed up, I was too tired to bother.

By the following week I’d agreed to do another job, a change from the usual. From the 28th November I would work at another site 2pm until 10pm. I was offered the 6am to 2pm shift first off, but somehow the thought of having to get up at 4am in the morning in order to get in on time for the start of the shift held little by way of appeal..

The secondment would be for about four weeks and would involve managing a team of Temps. It was also at a site the opposite side to where I normally worked in the town.

I was up around 8am, had breakfast and once finished I idled away time until the laundrette opened. Things went off-plan when I let myself get caught up in shredding papers and sorting out recycling rubbish for the bin men on Wednesday. So involved, that it was around 11.30 that I’d remembered the planned early visit to the laundrette.

I thought about dashing off, then remembered that there was no way to be sure how long I’d be in the place, and the old stomach hated to be kept waiting beyond mid-day for its Sunday feed. So I decided to do lunch first.

A quick meal, fish, sweet corn, carrots and potatoes. I got the stuff out of the ‘freezer and placed the fish on a tray and into the oven. I switched on the oven, the clock light went out, then came on and then went out again.

I shrugged, I wasn’t trying to time the cooking so what did it matter. Then, I realised I couldn’t hear the fan from the over. The light wasn’t on inside the oven either. Strange. So I then tried the hob. No heat.

If it hadn’t been that I’d seen the clock on for a few seconds, I would have thought I’d forgotten to turn on the cooker at the socket. I did check the socket, just to be sure, but it was switch on. The ‘fridge also worked off that circuit, so I put my ear to the ‘fridge to listen for it making a noise. It wasn’t. Great.
But all was not lost. It was, I decided, not a really a big deal. So I got the toolbox out, took hold of a screwdriver and fuse wire and opened the door to the cupboard under the stairs. I could see the appropriate fuse carrying a slight brown stain. It confirmed it. The fuse had blown. Been there before, earlier in the last decade the lights’ fuse went through a phase of blowing. The trouble was, then I wasn’t as well organised as I am now. I did have the right screwdriver and the fuse wire but not in an easily (or indeed known) assessable place.

I took hold of the offending fuse and within split-second of its removal, it fell to bits in my hand.

I wasn’t happy, hence I said out loud: “How terribly inconvenient.” Or words meaning more or less the same thing.

After a few minutes, after the pain in my toe died down – I kicked something which hadn’t seemed all that hard but had been – I decided to take stock. What was the worse thing about the situation?

No Cooker. No fridge. Hmm, well, no cooker wasn’t the end of the world short term. But the fridge was a problem. This fuse problem had hit just after I had filled it up with food and now it would slowly defrost.

Even my capacious appetite would have a problem shovelling that lot down within a few days.

Then of course a touch of common sense intruded on the blind panic. Whereas the cooker was part of the socket itself, the ‘fridge plugged into the socket. So, all I needed to do was plug it into another socket. And as luck would have it , there was a double socket a less than eighteen inches away. Only one plug in use and that was for the microwave.

So, I unplugged the ‘fridge and tried to plug it into the other socket. The lead wasn’t long enough.

A glance to the heavens; thwarted again!

I thought for a few seconds and came up with another solution. I got a spare extension lead. It wasn’t ideal, but I plugged the ‘fridge in and smiled as I waited for the ‘fridge to burst into life…

I listened but the fridge didn’t make a sound. Great. So the ‘fridge was screwed now as well.

I got two paces inside the dining room and there was a shudder and the fridge kicked into action. It must have been trying to piss me off even more than I was already pissed off.

So, a little relieved I went to the laundrette, which seemed more packed out than usual and so it took a record two hours to get the washing done.

I was still in a bit of a mood when I got in, very hungry. So, I decided I’d have to microwave the fish and microwave oven chips instead of the other vegetables I’d intended to have. It was either that or crunch my way through frozen fish and chips.

I was sure that the Pink Lady recommended a nice hot bath to relieve stress. I usually did the bath thing in the evening on a Sunday but decided late afternoon was ok.

So upstairs I toddled and switched on the emersion heater, then went downstairs and looked up the route to the place I’d be working at on 28th November.
I went back forty minutes later and started to run the hot tap, which after five minutes was still pumping out cold water. Oh great! Had the fuse gone on that as well? I opened the cupboard and looked at the light near the switch. It was on so the fuse couldn’t have gone.

The only other cause I could think of was that the element had gone. It would be the fourth in the twenty-five years I’d lived in the house. The water being hard, tends to clog them up, or so I’ve been told.

OK. No bath. Kettle on and a body wash. Oh fun.

Before that another pressing need had to be taken care of. I sat on the thrown (for want of a politer term) and reflected on the day. It hadn’t been one of my best and I was hoping this was the end of it.

I’d just finished the paperwork (being polite again), when the toilet seat broke. It was leaning that did it…

I got up from my undignified position – being on the floor, trousers around your ankles and your arm through a toilet seat – and felt like throwing the toilet seat. The only trouble was, with my luck at the moment, I’d throw it at the inside wall and it would bounce back and go through the double-glazed windows!
I’ve never been must of a DIY enthusiast, I’m more of a GSE person – Get Someone Else…

However, when I mentioned my predicament to Neatentidy, he offered to come to the rescue.

Of course, being without a cooker wasn’t an idea situation. The amount of times I was forced to consume takeaway curries or Chinese…well, it was just torture.