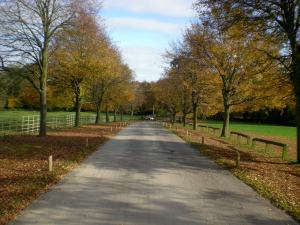 A bike ride with The Pink Lady - Lydiard

I bought a bike in 2007, around the end of October, and did it to get some exercise. Well, that and to prevent nagging from the Pink Lady and Velocipede, both of whom are very keen cyclists.

I have always been more of a walker myself, but gradually I warmed to the idea of getting a bike; better than having my ears warmed by the aforementioned ardent cyclists.

For around two hundred and eighty quid I got a bike, lights, helmet, the lock, repair kit and pump. Oddly enough, the helmet took longer to choose than the bike. I deliberated for a good fifteen minutes over a purple coloured one, but in the end decided that would lead to loads of jokes. You are probably working on a few as you read, so I will leave it there.

As I handed over the cash I eagerly waited for my bike to be brought out when the Bike Chappie asked: ‘Will you put it together yourself or would you like us to do it?’

I frowned. ‘Put it together?’ I queried.

‘They’re in pieces, are they?’ I responded.

I thought I paid for a bike not a jigsaw puzzle!

‘Well not fully assembled. We make the necessary seat adjustments, put on the lights, fix the lock holder…’

Velocipede did not mention any of this. It was starting to get a little complicated for the old Fitrambler brain.

‘No cost,’ Bike Chappie added, as an incentive.

Best thing he could have said. Two days later I collected the bike. Moved it towards the door, thinking it looked pretty good and, I admit, feeling a little keen now the moment had arrive. Then Bike Chappie stopped me in my tracks.

It was thirty years ago when I last rode a bike and then things were different (anyone mentioning Penny-farthings will be shot!). Why would I need a check up? I was fairly fit for my age and why specifically for riding a bike?

‘My doctor recommended I take up bike riding, so he must think I’m up to it.’

‘No, no,’ replied Bike Chappie, giving the sort of patronising smile you get when they know more than you do – a sort of Jeeves superiority. ‘No, a bike check up.’

He saw that I looked a little dubious so added. ‘All part of the service and the first one is free.’

Hearing the free bit made me a little more kindly disposed to the ‘check up’. Free is good, I like free.

I got the bike out of the shop and began to wheel it home. Then, after a few yards, decided why wheel it, home, rather defeats the object.

So I hung my Halford’s bag with the lock, helmet and repair kit over one handlebar and decided to mount the bike.

Should not be a problem. In my teenage years I rode a bike all the time. Getting back into it would be easy, I mean it would be just like riding….hm, yes, well you know what I mean.

So over goes the leg (cue titters for leg-over jokes) and I get on it. It seemed very high up and I started to wobble along, feeling a lot less confident. It was not as easy as I thought.

I started to approach a tree at just above walking pace and suddenly found my coordination was not up to it. I knew I should turn, avoid the tree, but for some reason, trying to keep my balance and turn was something I was not capable of.

Not thinking of the obvious, like squeezing the breaks, I leapt off, immediately wishing I had not been so rash.

A few minutes later, once I finished dabbing my eyes from a bent, holding-my-knees-position, wishing it was a ladies bike, I decided to go back to Plan A and walk the bike home.

I put the bike in the place which would become its home and sat at my table, thinking.

It was an understatement saying it had not gone well. I was prepared to be a little wobbly, even get achy legs after a ride but not achy danglers.

So, for the rest of the evening, every time I went passed the bike, my eyes produced an odd tear or two.

Next morning, I decide I have paid out enough for the thing, so I should at least attempt to ride the devil again.

So at an early hour – no neighbours out and about to think the Cabaret’s arrived – I make my second attempt to ride it. This time hoping the crossbar will not do a Platex bra on me, you know, lift and separate the old crown jewels.

I roll down the slight incline, helmet on head, trying to keep my balance and not doing a bad job of it. The problem begins when I get close to the end of the road where I need to turn right. For a few seconds this confuses the old grey matter and my coordination gets a little shaky but I manage the turn quite well, and do not fall off and more importantly the crown jewels do not take a belting!

Well, almost, the car that swerved to avoid me, made me realise that keeping my balance, being able to turn AND looking out for cars coming out of a T junction should have been on the operational list.

I got to work relatively unscathed that day. Got off the bike and the old legs felt a bit wobbly, and I seemed to be doing John Wayne impressions, but I was not as tired as I thought I would be.

That evening I rode back, still not feeling as achy as I thought I might be. Although it must be said I was suffering from sore arse syndrome; an inevitability when one has not ridden for years.

So, after tea that evening, I text The Pink Lady and Velocipede, let them know how things went.

The Pink Lady suggested I get some Panniers. Sounded a little disgusting to me until I looked up what they were on the internet. Bit like saddlebags for a horse but for a bike.

I decided to wait a while on that one, see how much I got into the bike riding before adding further expense.

By the following Saturday I got up early and needed to collect a parcel. I decided not to walk, I would go on the bike. Bound to take less time; besides, I felt I should use it as often as possible.

I got three-quarters of the way down the cycle path and the back wheel did not feel right. I got off and the tyre seemed alright, but it did not have me on it. I felt the tyre and found there was little air in it.

Puncture, I thought, my deductive powers being at their height at 9am in the morning.

Great! Today of all days!

I tried in vein to pump it up with my bicycle pump, for a while trying to convince myself it just needed a top up.

It was then I really looked at the pump, which, for a few seconds I considered in my frustration, launching into space. It was shaped rather like a circumcised penis. Something the Pink Lady would point out on another occasion. I had not noticed that before. Oddly enough, I have a penis that looks a little like a bicycle pump! Life’s full of coincidences…

Finally, I gave up. It was a puncture and no amount of pumping – regardless of what the pump is shaped like – would do any good.

I got my parcel, walked home pushing the bike and now wondered how I was going to break the news to The Pink Lady. We had not really got to know each other well at this time and so telling her I could not go on the bike ride because of a puncture might have sounded like I was trying to get out of it; she might think I was just being a wimp! 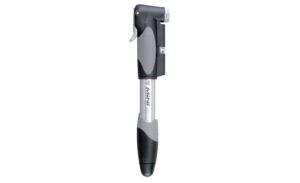 As I continued to curse, I put the thoughts of The Pink Lady to one side for a while.

One week into having a bike and my first puncture. One bloody week! This was why I was so hesitant about getting a bike. At least with walking you do not get punctures.

I tried to text and then call The Pink Lady but did not get any response to the texts and only her voicemail when I dialled.

There was nothing else to be done but meet up and grovel, really.

So I walked to the place where we agreed to meet. Needless to say, as I got closer, the lack of a bike at my side drew a frown to the awaiting Pink Lady.

‘Mm, got a puncture,’ I opened the conversation.

‘I wondered where your bike was?’

‘Yes, I went to get a parcel and got a puncture on the way. Left the bike at home…’

I felt a ripple of inadequacy flow through my body. I confessed I could not.

Earlier in the week, with the news leaking around work Fitrambler was in possession of a set of wheels, I was given a bike helmet by a bloke I worked with. It was a nice gesture but the helmet was too small. I brought it with me for the Pink Lady, thinking it might fit her.

As I handed it over, I felt as though I was trying to compensate for the puncture, even though it was originally intended as a gift.

‘Perhaps we could do something else?’ I feebly suggested.

I could not think of an answer. I am not sure whether I was a little oversensitive at that moment in time or that the words really were a tad sharp.

After a few minutes which seemed a lot longer it was decided we would go back to The Pink Lady’s place. Luckily for me she did have a back up bike and although a female bike – a sigh from the Crown Jewels or my imagination? – it would do the job.

I felt I did not have much of a choice. I agree to go for a ride on the girlie bike.

The girlie bike was quite comfortable and it obviously solved the problem. It was about ten miles and I understood why The Pink Lady suggested it would be a short ride. I was still thinking in terms of how long it would take to walk ten miles!

We were back at the Pink Lady’s in quite a short time and she invited me to tea. Having experienced her cooking (a pudding) when visiting Mr and Mrs Thereslovely, my friends from Wales, there was no way I wanted to refuse; although I did try a little procrastination to be polite and also because I was not sure whether or not I was imposing…

After a rather good meal and a chat, I was thrown out – metaphorically speaking – at around 7.25pm; and on the bus I text Velocipede.

I was going to need his help dealing with the puncture….

Well, ok, if I’m perfectly honest, I was going to need him to fix the puncture. It was over thirty years since I last did one and the cog system for gears on the back wheel was less complicated then; only three gears!

I sighed. I hoped this was not going to be a taste of things to come, constant punctures…